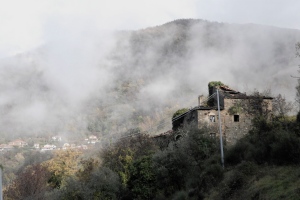 It is a post-war morning.  The destruction from last night’s violent wind is more than just a mess, lain against a backdrop so rich in experience.  Memories of war must have seeped up through the soil, for suspended in the air is a blanket of sadness, gusts of wind as intermittent reminders that the war has moved to the next village.  Fence poles lie motionless in the fields like downed soldiers while the great-grandads of farm tools are spread across the lawn in war’s aftermath.

Most people aren’t living, but rather in a perpetual state of coping until a much-feared end.  What if the end could be a celebration of all things leading up to it, of a life well lived as opposed to spent?  I am sitting in the kitchen of the main house, facing a window to the hundreds-year-old stone house with a collapsed roof.  Potential has a way of enlivening the soul, with so many ideas spinning round and round.  The restoration will be immense, yet meticulous, with reverence to preserve the integrity of a grand relic.  Will it become a spa?  A villa?  Or something else circulating above?  In the meantime, clusters of wall-growing greenery infuse it with life while the plan simmers gently in the ether.

To live one’s life based on abbreviated truths, second-hand and doctored images, and quick-fix acquisitions results in a life of slavery to a finite stable of dense matter.  “Things” are proposed to give us freedom, or speed, or comfort, or beauty, but in due time they fade into the collective stalwart of matter.  Dusting objects, insuring them, paperwork, storage, maintenance, protection… no wonder a life’s mission can seldom be unearthed from beneath the rubble of things’ ongoing to-do.

Within the ruins across the property are tiny rooms where families would huddle around a stove together day after day in the winter months, solid construction of lives gone by still linger in a heap of possibility.

Behind the Scenes Stuff